Brand Activism is a key business trend I have been tracking with my work at Flux Trends. In essence, brand activism involves brands stepping outside of their corporate comfort-zone to confront a tricky social issue and take a public stance about what their brand stands for.

A great example of brand activism in action comes from Ben & Jerry’s. The ice cream brand took a decision in 2017 to stop serving individual customers two scoops of any one flavour of ice cream until gay marriage was legalised in Australia. (Incidentally, it looks like Australian two-scoop ice-cream fans will soon finally enjoy their double portions again. Who knows? Perhaps ice-cream greed was a factor in the vote.)

This was a brand risk. Supporting equal marriage rights may be right, but it is a brand risk. Not everyone likes the idea of two men (or two women) in a marriage bed – that’s why gay marriage was illegal in the first place. By publicly siding with liberals, Ben & Jerry’s has also deliberately, knowingly alienated and angered conservatives. That’s what brand activism is – taking a stand, taking a risk, taking a side. And it’s this boldness, this un-charaterisic (for companies with shareholders)  willingness to leave potential sales at the proverbial door that makes brand activism work – it’s the side-taking that makes the brand-fans in your own corner become passionate brand supporters, at the same time as it makes your brand enemies. (Sound a dramatic? – ask Keurig, the American coffee-maker brand, that learned the hard way not to piss-off self-sabotaging Republicans, when it pulled advertising from Fox news because of sexual assault allegations at the network.)

The idea is if you don’t stand for something, you stand for nothing. (Again – sound dramatic? Ask Uber. When Trump came up with his anti-muslim travel ban idea, Uber’s smaller rival Lyft pledged to donate a million dollars to the anti-travl-ban-lobby. Uber, on the other hand did pretty much “nothing” – in that it decided to continue with “business of usual” even as many of its drivers went on strike over the issue. Within hours #DeleteUber was trending on Twitter. Within a weekend a few hundred thousand Uber users had deleted their Uber apps and switched to Lyft. Ouch.)

But there is another point here – if your brand only stand for things that pretty much everyone is for or against – such as being anti-peadophila, or pro puppies – then you still stand for nothing. And that brings me to the icky advertising agency that decided to have Johnny Walker take a “stand” against women and child abuse in South Africa this week – by shutting down a public road (the Nelson Mandela Bridge, no less) and littering the street with advertising material (life-size gold – nothing tacky to see here – Johnny statues). Yuck. There is so much wrong with this. It’s like whoever sold the (very expensive) idea to the brand had read about brand activism without understanding what it meant and why and how it works. 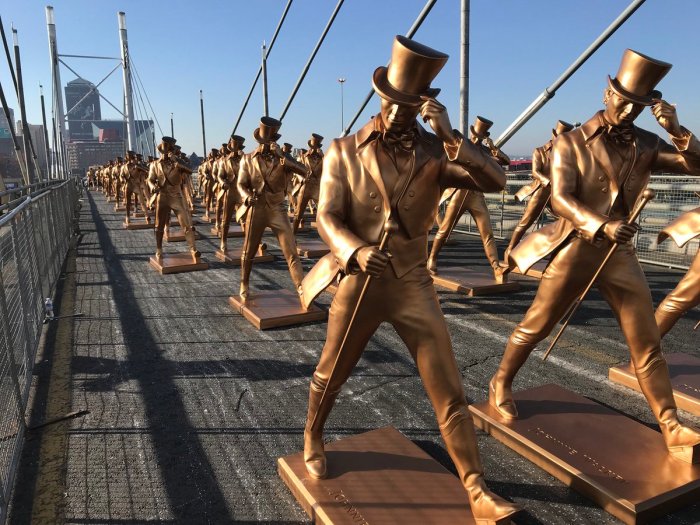 For starters they picked an issue to take a “stand” against that everyone agrees with. Nothing controversial or brave about saying beating up small children or brutally murdering women is bad. The brand is not stating anything new here. They are not being brave, bold or brilliant.

Secondly, they are an alcohol brand. In the business of selling hard liquor, mostly to men. Alcohol abuse is a key factor in violent domestic abuse. As such, the brand’s choice of issue to stand against is more than a little ironic.

Thirdly, they chose to make their “protest” in a public space – shutting down a public road, paid for by public taxes – and turning it into a private catwalk for their brand. It’s always nice to know your tax-rands are being used to support a private company’s thinly veiled profit-addenda. (Aside: Let me be clear – I have NO issue with profits, companies or capitalism. I am an unashamed, free-marketing loving “randroid” at heart. I DO however have a BIG issue with public (tax) money being used to benefit private entities. That’s just plain bullsh*t. Don’t even get me started on 94.7.)

Fourthly, the stand is irrelevant to it’s cause. It’s not lobbying for any state change. It’s not aiding victims or punishing perpetrators. It’s a campaign designed to draw attention to something everyone already knows about (and the brand, of course), that does nothing to actually help the victims, and costs the brand behind it nothing but ad rands. There is no self-righteous brand sacrifice here. It’s just showboating. Show me one man who decided not to raise his hand in drunken rage last night because some gold statues were arranged in an Instagram-worthy display around Jozi’s most picturesque bridge.

Fifthly, this is about publicly, PR, free advertising –  not about protecting the vulnerable. They are, in truth, using women and child abuse to call attention to their brand. They are literally capitalising off the blood of the people they are “standing for”.

But that’s the brilliance of the free market system. The market gets to decide who to support. And most of us are smart enough to smell the difference between brand activism and brand sluts.

PS: Here’s an idea for Johnny Walker – a brand stand that might actually make a difference to the cause they say they are standing behind (there is a catch though – as with all brand activism – it’s going to hurt Johnny at the tills in the short term):  How about Johnny refuses to sell alcohol to South African men of all ages though all its retail stockists until domestic abuse statistics decline by 10%? How about the brand only permits sales to women until that happens? Who knows. The brand might just find a whole new, passionate, target market if it’s brave enough to walk the talk.

PPS: Sorry-not-sorry about the puns. I can’t help myself.